In my travels, I witnessed many remarkably dull things.

A few weeks later I heard from most of the schools (except for UW and UM). I was offeredinterviews at 3 of the schools in this order: Columbia (NY), Regis (CO), and Mayo (MN). Shortly after receiving interview confirmations, I drove to Havre, MT on a tip from my friend Jacob that I could have a suit tailored for half the cost of buying one in Bozeman. He was right. I bought a pretty slick suit, shoes, ties, pants, and a belt. This was expensive, but still slightly cheaper than the same package in Bozeman, even with gas for a 10 hour round trip commute. A few different people told me I look like Big in that photo - but I watch the movie and I assure you, I look WAY less creepy. I would really like to see that same in some creepy B Horror movie. I think it would be a great fit.

Next came the inverviews which I have described below. There are some pictures for your viewing entertainment.

Dr. Dr. Dr. K: "I'm reading through your application here and your GRE scores appear to be very low, especially your writing score. Lets talk about that. I mean, tell me about that."

All right, motherfucker, lets do this. I can only describe the 20 minutes following Dr. Dr. Dr. K's opening question/comment/concern as an academic sodomy. It was bad. The whole interivew was more of an inquisition into my academic inadequacy as a candidate for their program. 3 months later, I received a letter in the mail that said "Thank you.....we regret to inform you that our admission committee has failed to act favorably on your application to our physical therapy program." FAIL. But I got some neat pictures, I think.

New york was fun, and big. The only people who seemed to communicate with strangers or one another were the dogs and the cabs. Dogs barked and cabs honked their horns. I would venture to predict that judging the relative importance and general hierarchy of lifeforms in NYC can be based on 2 criteria: (1)the number of parts contacting the ground and, (2) the relative size to other lifeforms. Cars, being the largest lifeforms and with 4 contacts, are clearly the dominant species. This is evident by observing their high speed and blatant disregard for ANYTHING AND EVERYTHING in their paths. Right below that is dogs who also make 4 contacts to the ground, but are clearly smaller than most humans. The exception to the height predictor comes from observation. Dogs lead humans around the city by leashes, deficate and urinate wherever they please while it is the human's job to clean up, and bark at any god damn thing they please, without fear of reprisal. Next down the list is humans, and below that is pigeons. Somewhat harder to classify are the cyclists - who appear to be going through an identity crisis. They are not humans, or vehicles, yet travel on both paths and are loathed by both humans and vehicles. 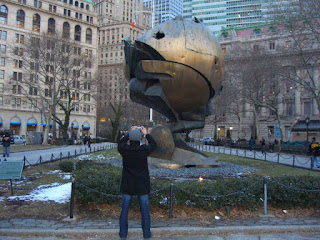 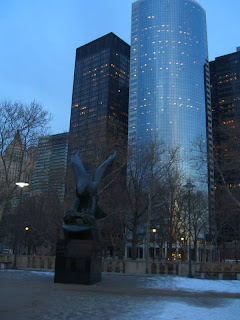 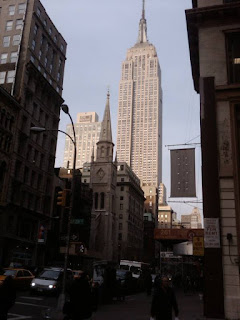 And to your left, there is a statue of a bird with tall buildings behind it. Also pictured, next to the bird, is another tall building. I'm sure it has a name, I just don't care what it is. 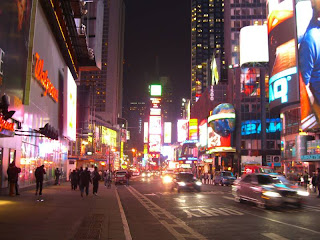 This picture was taken in TIMES SQUARE!!!1woot1!11one!!! Right after I took this picture, a complete fucking stranger walked by and hit me in the ear. I shit you not, I got deliberately HIT in the FUCKING EAR! This is bullshit.

The mayo clinic was by far the most impressive "campus" I have ever been on. Their facilities are incredible, their fitness center was like something out of a utopia movie. The interview to get into their school was very hard. It was strictly behavioral in its approach. The idea behind behavorial interviews is that the best predictor of future performance is past performance, so all of the questions are situationally specific. To prepare for this, I read through several of my resumes, and spent a considerable amount of time thinking about past jobs and stressful situations I had been in. This helped a little bit with my thought processes, but did not prepare me for any of the questions specifically. The interviewers said hello, told me their names, explained that I was going to get 5 questions, asked me 5 questions, then thanked me for my time and sent me away. 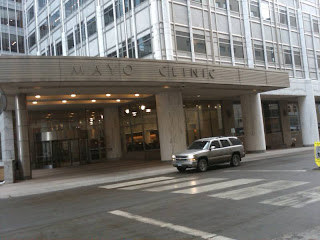 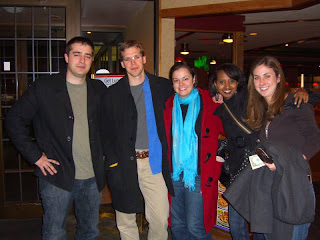 While I was in Rochester, and NY for that matter, I used a website called Couchsurfing.com to seek out accomidations for my travels. When I describe it, people think it sounds shady, but I assure you it isn't. It's a hospitality network, of sorts, with an feedback and reporting system so you can see who has and hasn't hosted guests, and how they were as a host or guest. Very cool. The two people directly to my right hosted me in Rochester and were more than accomidating. We went gambling togehter! Good times... My host in NYC was also very good, as well, and showed me around downtown NY (i think that's where I was). The picture on the left is of the front doors of The Mayo Clinic. The whole thing is amazing.

There isn't any really cool story here except when I flew to Seattle I forgot my debit and credit cards, and only had $40 on hand after I arrived in the city. Oops. I was rescued by friends though, and thanks anyone who talked to me while I was in the airport bored and alone. Edwin saved my life the first night, we had nachos, beers, and visited chopsticks - a sweet ass bar with "dualing" pianos" (Picture 1). That was probably the coolest thing. I got a little bit drunk and ate too many spicy things. The next day, I visited U of Puget Sound. There was no interview - I appliced and got a letter a 2 months later letting me know I had been accepted to their school. The purpose of this visit was for me to assess my own interest in attending. BEAUTIFUL campus (Picture 2), except the PT school. Everyone was very friendly, and it was a comfortable setting, but something - I can't put my finger on it exactly - told me this wasn't the place for me. I have to go with my gut on this one.

I spent the rest of the afternoon wandering around a few blocks away from UPS in search of US Bank. I found one, acquired money to fund the next 3 days, and took my life in my own hands riding Tacoma's public transportation system: Sound Transit. Bullshit. The whole thing. I was on busses for 4 hours trying to get 25 miles. The busses run stupid routs and stupid times and stop running early, and I didn't really know where I was or where I was going. I got back to Edwin's place, but hated the stench of Tacoma too much. I spent the rest of the weekend with Craig rooting for the Sounders, Michigan, and Arrested Development. Good times. 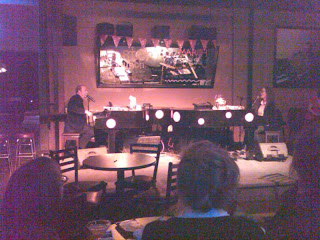 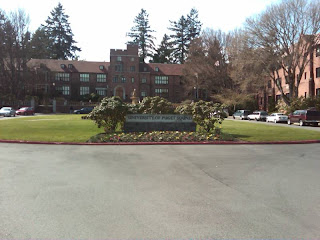 Chopsticks on the left, University of Puget Sound on the right. 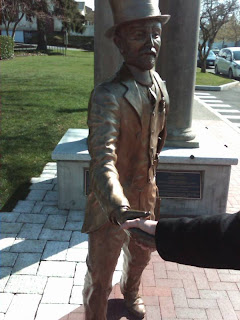 I found this guy while I was wandering around looking for a US Bank. I liked his hat, and asked if he would be my friend. We shook hands and the rest is history.