Dorm Phones: To reach the internets please dial your operator.
Posted by Unknown at Wednesday, June 29, 2011 No comments:

This was a great article I read recently about one man's struggle dramatic weight loss without a dramatic struggle.  The writer did a great job hitting every part of being fat and changing - what it feels like, social stigma, how people responded to the weight loss, all the failed fad diets and failed attempts, self efficacy, environment, support, mechanics, goals, etc...All the weight loss took  was a change in lifestyle activity!  That's it.  He started walking more (partially because he had to moving to New York).  He saw  a nutritionist at one point, when he came to a plateau, worked out a simple plan and lost even more.  He said he wanted to cheat and eat things he shouldn't, and did sometimes.  He ended on a note which was particularly poignant about encouraging other people to make change - basically that you can't.  The process is simple, but it either takes motivation or forced lifestyle change. Change will happen when the pain of the solution is less than the pain of the problem. 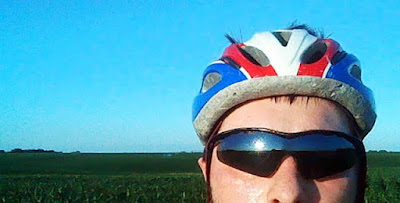 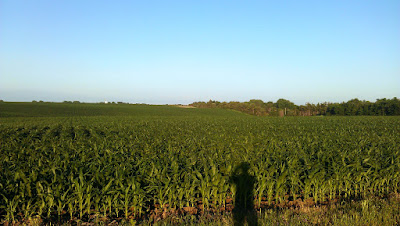 Oceans of Corn
Posted by Unknown at Saturday, June 25, 2011 No comments:

38.6mi. 2hr 28min 18sec. HRavg=167 Max=188.  AvgSpeed=15.3mph. TopSpeed=28.3.  1hr 28min HR>168bpm. BAM!
On Wednesday I went riding with a group in Hastings in an effort to get out of my dorm room.  It's probably the best time outside of clinic I've had since I've been here!  Fun group of people, too bad I didn't meet them 6 weeks ago.  Weekly rides at 6PM leaving from the museum.  I've attached a couple pictures of the ride and other rides from around Hastings.
Coming up on my last week in Hastings Nebraska at Mary Lanning Memorial Hospital.  My rotation here has been in the Med/Surg, Progressive Medical, ICU, Oncology, and Acute floors of the hospital.  I've seen a lot (of bowel movement), to say the least.  It's been a good learning experience, trying to keep up with the patient load and the pace going from room to room with evals cropping up faster than the freaking corn in this state!

It's an 8 week rotation and I'm one week away from the end. I have 2 more rotations starting in October and January - 12 weeks each.  The 8 weeks away from home have been a drag. I miss home, the dog, cat, garden, civilization, etc...  Pics of the dog and cat while I'm gone doing silly things.  Here they are on the right.  She woke up one morning and they were both staring at her.  The other picture is the cat taking the dog bed, and the dog wanting to play.  I wish I could have been there to see it!  7 days from now I will be home again, then back on the road.  I'm not already packed to leave Hastings NE (YESIAM).
The end of this rotation marks the beginning of the last academic semesters of my career! A few weeks on, comps, and a few weeks off, last two clinical rotations, portfolio, research, big exam, then gainful employment as DPL DPT.  There was a goal about that I wrote about when I started this blog.  See Goal #1, 10/7/2007 10:49PM.  1 year away from something I've spent several working for!

And now for the Hastings Nebraska picture slide show for your viewing pleasure.  I want to start with a picture I call IRONY:

Neighborhood Watch.  Wait... WHAT?  This was on a bike ride.  8 miles from nothing in any direction along the side of highway 281.  All that's missing is a scarecrow (unless someone stole it).

A picture from another part of town.  South side of town.  Paul's House of Pancakes on the right, dust and corn on the left. 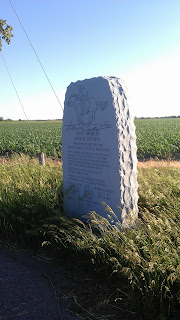 Found this monolith on another ride.  It has nothing to do with 2001, technology, or intelligence.  A big stupid rock, 15 miles from nothing. #exceptcorn.  This monument depicts two brothers riding away from an Indian attack (#cowboysandindiansinreallife).  An arrow pinned the two boys together.  Then it fell out and they lived.  The arrow is ACTUALLY ON DISPLAY at the Hastings Museum next to a gigantic vat of Kool Aid.

This is a picture I took on a ride on the west side of town.

This is a pic of the west side of town.

Quote of the ride: "Eeverybody's gambled on a fart and lost." Where these guys 6 weeks ago?
Posted by Unknown at Wednesday, June 22, 2011 No comments:

Feed Your Eyes on This or In Web2.0, Literature Searches YOU!

I apologize for their not being any audio - you would have had to have been there... Comments Welcome!

1 thing I could have emphasized more was Tags and Organization.  Tags help you find things along common threads throughout the internet.  Searching a hashtag like #pain on twitter will give you all kinds of results. Use them accordingly to classify and thread items you wish to save or recall for later - either with cloud based apps like Evernote or Springpad, blogs, or more traditional desktop apps like Onenote.  Finding a balance between over-tagging and under-tagging is an art.  You want to be descriptive without washing out the exclusivity of each tag.   If you figure out a good system, let me know...
-d
Posted by Unknown at Tuesday, June 21, 2011 No comments: