To CRUSH your enemies! To see them driven before you! 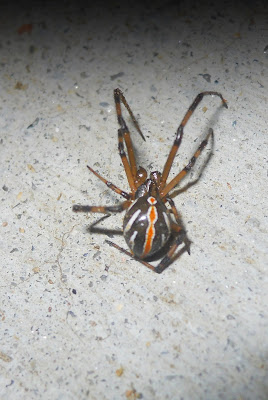 My mission? To boldy seek out new life forms wherever they may fester and snub them out completely.


This rampage took place in early August right before I left for clinical. It started becasue I had an ant problem. Investigating the ant problem led me farther down the rabbit hole. I found lots of fun stuff. To date, I've probably killed 5 or 6 black widows in my back yard now but only took pictures of 2. Read below: 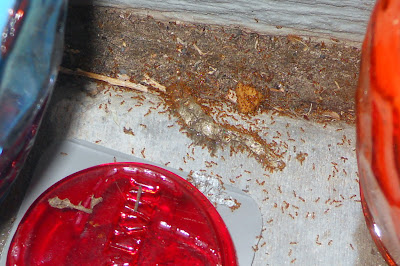 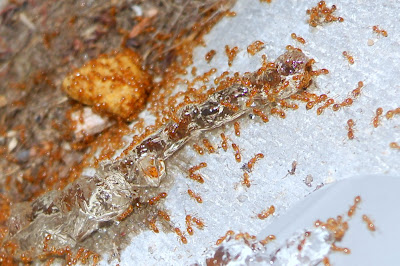 These sterile females are tiny. When disturbed, their colonies SCATTER with hundreds of queens per colony and form new ones. Sprays were ineffective for that reason. I've moved to boric acid gel baits. Here they are after the dug a hole under the dog's food dish. It was the same night Dimitri scratched little Mia's eye. I was in a bug killin' mood. This little mass of ants inspired a midnight bug killing spree. 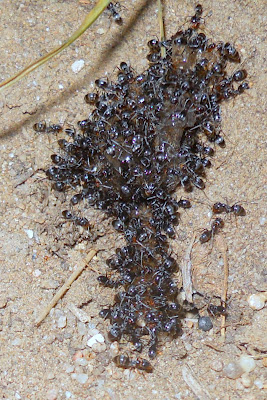 Lasius niger. The Black Garden Ant.
These guys have basically been harmless except for really small piles of dirt on my back patio. Sometimes they mass up in the front yard and form piles on the sidewalk. Not a single one in the house all summer, but Bobby didn't like the way the looked when the piled up on the sidewalk for an hour or two a couple mornings a month. I didn't have to bait and poison them, but I was in a bad mood. 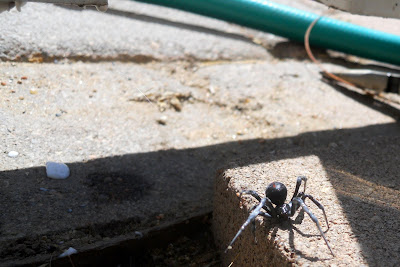 I saw this funny looking web on a midnight prowl for ants. I saw 3 black legs right over the rim of the post. Closer inspection revealed a black body and something red - but she bolted up into the shaft before I could ID her... I should stick my camera in and get a better view...

All you can see is a blurred red dot at the very top. Neigh unidentifiable. Going to come back in the light with proper ant killing equipment. You might need to click on the image to get a better view. 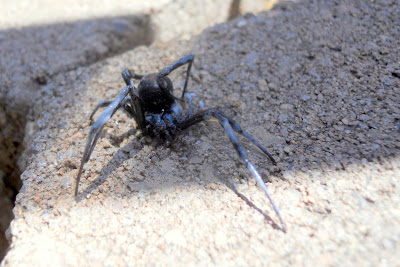 Moments before an agonizing death. Raid. Lots. Up into the tube. She repelled down onto this brick and took a few steps and paused. We locked eyes. It was her or me. She's a man killer, to be certain. I don't want to give her that chance. She made a move. I hit her with a Hammer. Twice. Gallagher that fuck, would wish... The RAID probably would have done the trick given a minute or two more but my way was much more satisfying.
Changing Gears...

Genus: Vespa, Species: beats me - it's a fucking hornet. or a wasp. This picture always makes me want to watch Kill Bill. 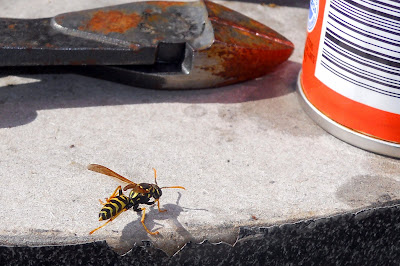 Pictured previously, this little guy didn't stand a chance. He did not appear to be any part of the 3 formal wasp nests I had pwnd in the last week, but he had trespassed onto my bbq grill anyway. In my mind that offense justified using what was left of a can of flying bug RAID. First shot, he dropped out of the air like those helicopters you see in movies falling: "Oh SHIT! WE'RE GOING DOWN!" But, after he hit the ground, he got back up and flew in a couple small circles and then came straight for me. Luckily the 2nd shot grounded him permanently - where I took a quick snap shot - and then curbstomped him (not pictured - too much gore). 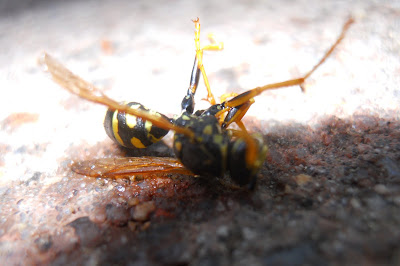 Nest #1: The first hornet mass grave. These guys were in the fence on my patio. It was the first of 3 hornets nests I would find. This was the biggest, and there are at least 8 to 10 fallen soldiers in this shallow space of dirt and weeds next to the fence post. 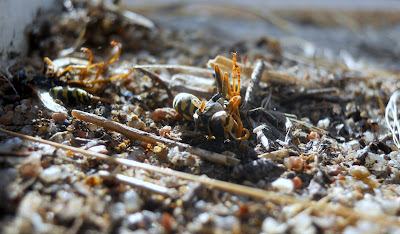 Nest #2: Opposing side of the nest.

Nest #3: This picture also makes me want to watch kill bill. This little guy was trying to crawl away when I shot him. Shot him ded.

Pogonomyrmex barbatus. The Red Harvester Ant (I think). Related somewhat to Pogonomyrmex maricopa (found in Arizona) - one of the most venomous insects in the world (20x stronger than a bee sting). W. L. Meyer (1996-05-01). "Chapter 23 — Most Toxic Insect Venom". Book of Insect Records. University of Florida.

This little harvester ant is not the most poisonous ant in the world. He's just a dead red ant. It's worth noting though, that the big mandibles in the front are designed to bite and dig in, so that if you flick it off, they tear or cut your arm. This ant is HUGE - about 1/3d the length of one of the hornets previously killed. Alive, he was very hard to photograph because he was FAST. He's easier to photograph now because he is dead (or dieing). Kicked the bucket. It's passed on. This ant is no more. It has ceased to be. This is a late ant. It's bleeding demised! THIS IS AN EX-ANT! 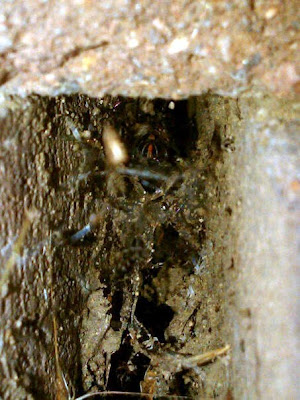 Juvenile Latrodectus hesperus. A young western black widow. Found in a crack in the bricks of my patio while I was playing with the puppy - 5 feet from previously dispatched widow. 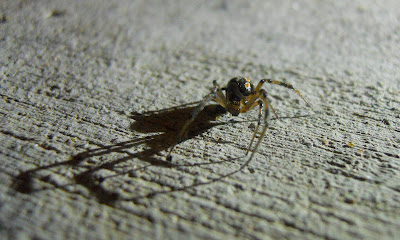 To boldly seek out new life forms wherever they may fester, and destroy them with extreme prejudice. Can I put any of this in my PT portfolio?

Fear not for my life, for she is dead. The white and orange stripes indicate that this here lady is a youngin - and has not reached maturity (not to be mistaken for reaching full potential to kill). All I see is a young man, girlfriend, or puppy killer (as well as a killer photo-op?). This one was gassed, squashed, then sealed into a zip-lock snack baggy and thrown into the dumpster so the puppy couldn't eat it.

Very Ded. Hour-glass underbelly - I had to be certain.
Posted by Unknown at Thursday, October 28, 2010