I don't necessarily mean to be an ultimate fighter but it would be fun to have something to train for again. I would like to be fit again. I am a Pre-Physical Therapy major - basically exercise science. It's a fun major and I enjoy it, but I'd like to live it at least as much as I am studying it. As such, I put together a massive MS Excel spreadsheet with tables, graphs, charts, and other implements of destruction (of fat cells! Ha!). I intend to use this exercise tracker to record all of my bouts of exercise from now until doomsday in hopes that I can develop a more structured and consistent exercise regime. I don't want to be a tri-athlete or some crazy exercise geek, but I would like to be fit again.

The other tool I am using is a heart rate monitor by Polar. It reports the number of minutes I spend at a given exercise intensity according to my heart rate. I have defined the three zones using ACSM's HHR (Heart Rate Reserve) guidelines for Light (z1), Moderate (z2), and Intense(z3) exercise intensities.

Here is what I have so far...
***Click on the tables and graphs for larger images.


This is the basic input cell in my spreadsheet. It is organized according to Day and Exercise Mode/Intensity Zone. This also totals and averages the minutes according to day, mode, and intensity.

This table below is the big deal. It took me the longest to make. It is a summary table of all of the data from set of totals and averages from the input cells above... It isn't necessarily complex, but it is the basis for all of the graphs which you are about to see. From left to right, it displays Total Minutes per Week per Mode (mode - run, bike, swim, hike), %Minutes per Mode per Week, Minutes per Zone per Week, %Zone per Week, Total Hrs Exercising, Weighted Total Hrs (weighted according to Intensity), and Minutes Exercised per Day. Following this table, I have several summarizing graphs and charts to help visualize exactly what I'm doing when I work out. 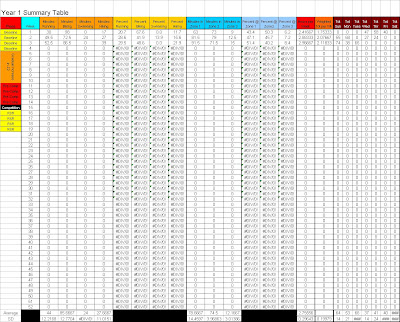 From here on out, I'm just going to post summary tables and graphs of the data taken from the data above...


The following is just a summary for the first 3 weeks of exercising... 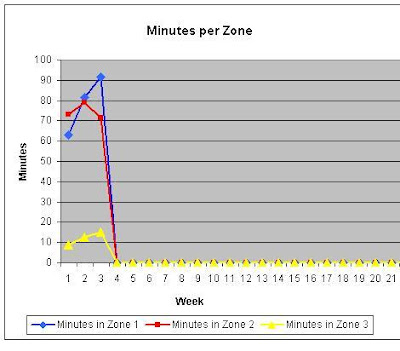 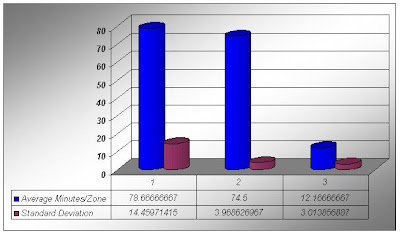