Teacher Hit Me With a Ruler 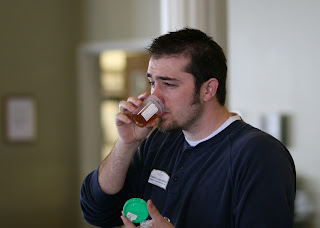 ...let me explain...
This is the last full (16 week) semester of my Doctor of Physical Therapy program at Regis University. It's not over yet. It is a very busy semester. It is busy in a purely volumetric way. The whole program has been so far. There are towers of articles to read. There are multiple (different) groups for even more projects. Video assignments skill checks, live skills checks, skills checks formatted like practicals, practicals, quizzes, papers, service learning, and finally service learning now, to consider.
Life gets busy and I lose track of myself at times - more times than I care to admit. When I get stressed out like this, it brings me back to the rules, and I want to explain what that means to me. I got these from my friends Mark and Joe.  I know the rules have changed, many times, but I've stuck to these ones.

Rule #2: You Reap What You Sow
This isn't a rule as much as it is a hope. Joe would say, I hope you reap what you sow so you learn something from it. I've ruined rule number 1 more times than I care to remember and end up getting Rule #2'd HARD. Hopefully, though, I keep learning from my mistakes.

Rule #3: No One Can Help Your or Be Helped By You if You Won't Help Yourself
I believe this one speaks for itself but seems more applicable right now in my life. I sometimes feel like I am struggling in school, and "spinning my wheels" way more than I should be to get some things done. I get frustrated with class sometimes because I don't know what's going on - but it's usually because I'm not paying attention. I need to wake up and get with the program before I start criticizing others for making my life feel more complicated.

Rule #5: Pull When Possible
Joe's model of leadership - if you push a string of pearls (I'm not calling anyone in my class a pearl) they go in every direction, but if you pull them, lead by example, and DO something first they will achieve a graceful order.

Rule #6: First Seek to Understand, Then to Be Understood
In this order: See Rule #4, #1, #2, #5, #6. School or personal life. I need to listen more to what other people are trying to communicate, not just to what they are saying. And then respond in a meaningful way to them. I'm terrible at using my words to communicate what I'm thinking or feeling about anything. This isn't just "active listening." I hate when people say that. You're still only listing to make sure you get every last word of what a person says - I think people still have (I certainly do) a propensity for hearing the words and skipping the context. Ours is one of the few cultures in which ALL of the emphasis is put on the communicator to accurately make a point so that the other person can make his or her own point. I need to learn to understand better when I listen. This one matters.

Rule #7: Do The Job, And Do It Well
That's it. Simple. If you're going to do something do it to completion. Mark, when reviewing it as an addendum to The Rules, was going to call it "Do the dishes." He literally meant "do the dishes" and not just do some of the dishes. In finding figurative meaning to #7, I think to a glass of wine I was drinking a couple of nights ago. I had previously done a pitiful job washing a wine glass. When it came time to enjoy a new glass of wine some days later, my enjoyment of said spirit was attenuated by several floating specs of what I can only call disappointment. It was my own laziness in the past (which at the time was the present) that ruined my present (which is now the past) glass of wine. If I had finished the job well the first time, I would have enjoyed the fruits of my labor later on. Mark's #7 was a roommate conflict. He has since taken this off the list of rules. I have, however, decided I'm keeping it along with the first 6, and am going to start adopting my own.
Rule under review:
Rule #8: Find a Way
It is close in context to rule #7 and in that I'm not sure belongs on the list. I'm mulling it over. While similar in face value to "Git 'Er Done" but wiff intecity. There are 2 stories that come to my mind when I say Find a Way - the first is of high school football. I might actually be making this up. I'm not sure anymore. IF I were a HS football coach talking to me, I would tell me to find a way to stop the guy who was 50 pounds my superior. It's as much a form of delegation as it is leadership - I don't care how you do it, find a way to achieve the end product. It also reminds me of a chapter of Blink (by Malcom Gladwell) where the US was playing war games with it self. It pitted General VanRipper to head the "Red Team" and gave him make-believe cruise missiles, rubber boats, and a small but dedicated force of follower. The military gave the "Blue Team" all the technology in the world in order to better dictate every possible aspect of the war. VanRipper didn't know anything about the enemy but sent some guys out in rubber boats with make-believe bombs in the middle of the night and said "Sink the bigger boats, I don't care how." And they did. just about all of them. Blue exit stage right.
Anyway...
(have somebody in the room hum the tune of something patriotic while you read this last part)
I'm here. I'm in my second year of PT school with most of the hard work behind me. I have to find a way to survive this final full semester and still find the energy to exploit every opportunity for academic, professional, and personal growth I have - starting with my neuro exam tomorrow...
-d
Posted by Unknown at Tuesday, February 15, 2011