All screwing around aside...

... I've decided to step things up. I'll let the graphs speak for themselves. 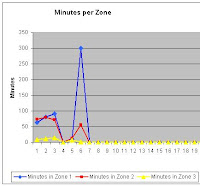 Minutes per zone... I have significantly increased the amount of time I'm exercising per week after a 2 week hiatus from exercising. Most all of the exercise has been at a light intensity. 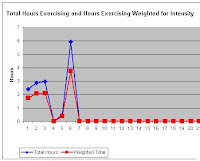 
I read an article in the paper today about a triathlete who qualified for the national triathlon in Hawaii. She said she trained 20 hours/wk to prepare for the event. I'm not a triathlete. 20 hours is a part time job and I've already got a full time job and school. 6 hours is by no means a great deal of time spent exercising. I like to think of it as more of a starting point. I hope to double the volume over the next 2 weeks. If I can squeeze in 12 quality hours per week I think maybe I'll have a handle on this fitness thing.

On a separate note - I'm definitely going to change the plyometric plan some... I've started jump roping again, too.
Posted by Unknown at Sunday, November 11, 2007